Those who have been in the west end of Sheppard East Village BIA recently will have noticed an impressive new visual addition – a mural on the wall beside the CP Rail overpass just east of Glen Watford Drive, on the south side of Sheppard Avenue.

The mural is the creation of a talented young Toronto artist named Elicser, who is associated with a non-profit organization called ‘Surface Art’, that successfully arranged for funding for this mural from the City’s StreetARToronto program.

As arranged by Councillor Chin Lee, there was considerable input from our BIA, as well as the local C. D. Farquharson Community Association and other nearby residents, when we met with the artist prior to his creating the final design.  The BIA’s request was that the mural reflect some of the area’s heritage, as well as depicting people from around the world, who now live and work here.

Congratulations and thanks to everyone involved in this project - that has added another attraction to the Sheppard East Village area.

We were pleased to join with Councillor Lee and members of the Community Association, for the official unveiling of the new wall mural on November 27. 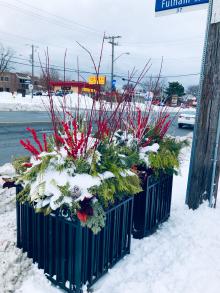 Why not drive through Sheppard East Village - so you can enjoy these appealing winter floral displays in 20 planters on Sheppard Avenue, between Midland Avenue and Markham Road.Read More>